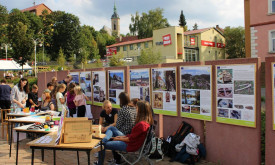 The repairs to Kittel's house are completed. The reconstruction took place within the project Slow tourism in the Euroregion Neisse. Currently, exhibitions and exhibitions are being prepared and the occupancy permit proceeding is underway. It will be open in normal visitor traffic in the second half of the 2019 holiday season.

The idea of “slow” travel originated in Italy, where it is not in a hurry. Thanks to the long-term cooperation of our project partner - the city of Zittau with the Italian Pistoia, many of this tourist trend was transferred to Zittau, but also to the partner city of Pencin.

The basic trend is the use of local resources and the involvement of the local economy in tourism. The trend today is culinary and local and regional specialties and products. That's why we travel and promote our project around the world. This year, thanks to our project and its partners, we were in Pistoia next to Zittau, Berenstein / Vejprty and other places. Kittel's pilgrimage of St. Josefa na Krásná, which is an example event of what modern “slow” tourism should look like. Thanks to the favor of the visitors and the local cooperating organizers or craftsmen, it had a unique atmosphere.

During 2018, a promotional film was also completed. In addition to brochures, exhibitions and leaflets, small promotional items such as ceramic mugs with the motif of Kittel House play an important role in the promotion of Kittel House. The mug was made unlike most similar products in the Czech Republic and does not deny the historical traditional shape, which is rarely encountered today in the flood of import ceramics. What the incoming poured into him, whether a valuable beauty treasure, clear water from one of the local spring or some place inspired by the drink will be a matter of its next owner. It will be similar with Kittel inspired locksmith ointment, which actually spread more or less lucky accident caused by local locksmith and Zittau executioner.

But all of this would be pointless to talk and prepare unless we proceeded further in the reconstruction of Kittel's house itself. The house is now interwoven with modern technological matters, which our spoiled times will enjoy, instead of a woodcutter that used to be almost everywhere. The water is now distributed to all floors at a number of locations instead of a single inlet in the cellar. In addition to the waste, new modern multicomponent chimneys are gradually being developed to complement the original hatchways, which can now only be used by prospective kittel cloakers if someone finally finds the mysterious formula needed to start with the cloak. Therefore, too much traffic in the existing chimneys is no longer expected, they will become a tourist attraction together with the whole house, because in most residential buildings the original large manhole chimneys have disappeared.

After several years, the exterior of Kittel's house also changed its appearance. The gaps between the timber beams were newly grouted with a traditional clay screed with hemp tow. (Tow is processed from traditional hemp in Bohemia). The clay eraser was reinforced and painted with a slightly tinted traditional lime paint. In order to increase the stability of the lime, lime was modeled with modern organosilicate-based admixtures, which preserve the paint's traditional appearance and flexibility, but also benefit from diffuse openness, or vapor permeability and durability.

In the coming months, we have to install selected tiled stoves, complete the refurbishment, or repair or restoration of the original door panels, internal top floors, complete landscaping including planting Kittel's herb garden and install exhibition furniture and equipment. The collections of the Kittel Museum, borrowed thanks to cooperation with Kitl, should also be moved to the house. If everything goes according to plan, the house should be opened in July 2019.

The house is being reconstructed under the Sn-Cz Cross-Border Cooperation Program, from which the Kittel House is co-financed. Of course, the joint effort of the partners and, indeed, the condition of the grant is the fact that the whole event is beneficial for the citizens of the region and both municipalities, ie Žitava and Pěnčín. The program is intended for the development of border regions and to bring benefits and development directly to the place of implementation for local residents. How this important moment of the project can be fulfilled is also at the local level, how they can take Kittel's house as their own. The point is that the monument should not only burden the public budgets, but also be able to fulfill it with its authenticity and tourist attraction. That is why we are already promoting Kittel House. In 2018, with promotional items, we visited, among other places, the Tuscan Pistoia. If we could bring something from the lively rush of this region while preserving all our local charms and advantages to us in Pěnčín and Krásná, there is no need to worry about the future of this beautiful corner of the country.